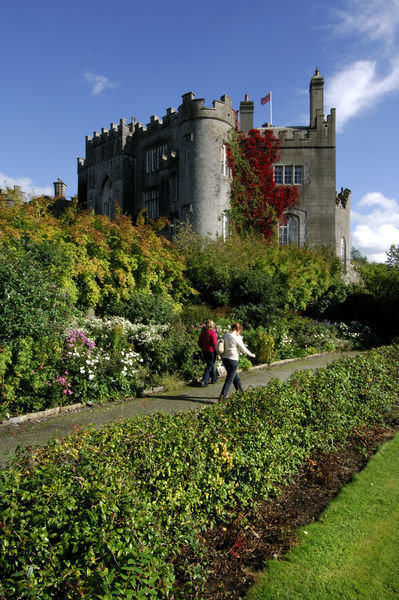 Ireland is famous for its Castles, many of which have been converted to 5 Star Hotels.

Have a wonderful Irish experience while staying at some Specially Chosen Irish Castles & Manor Houses. 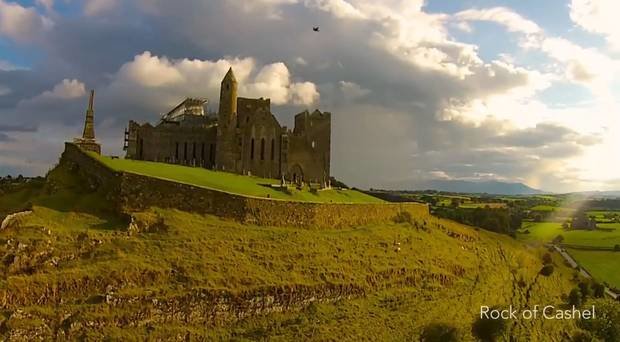 Welcome to Ireland Arrive in Dublin or Shannon Airport and transfer to your Hotel in Kinsale.

This morning depart Dublin for Cork via Tipperary. Visit to Rock of Cashel, possibly the most photographed site in Ireland, the Rock of Cashel towers over the town of Cashel from its perch on a 200-foot high outcrop of limestone.

Once the seat of the Kings of Munster. St. Patrick visited the rock in 450, while Brian Boru was crowned the first high King of Ireland here in the tenth century.

Granted to the church in the twelfth century, by the O'Brien clan, today the impressive stone walls enclose a round tower, a cathedral, a twelfth century Romanesque chapel and high crosses.

The Vicars Choral has been recently restored and its basement houses a small museum of artifacts found on the site. One of the leading visitor attractions in Ireland, in 2011 it was visited by Queen Elizabeth II on her historic first visit to the Republic of Ireland. A guided tour is strongly recommended. Continue onto Kinsale in Co. Cork. 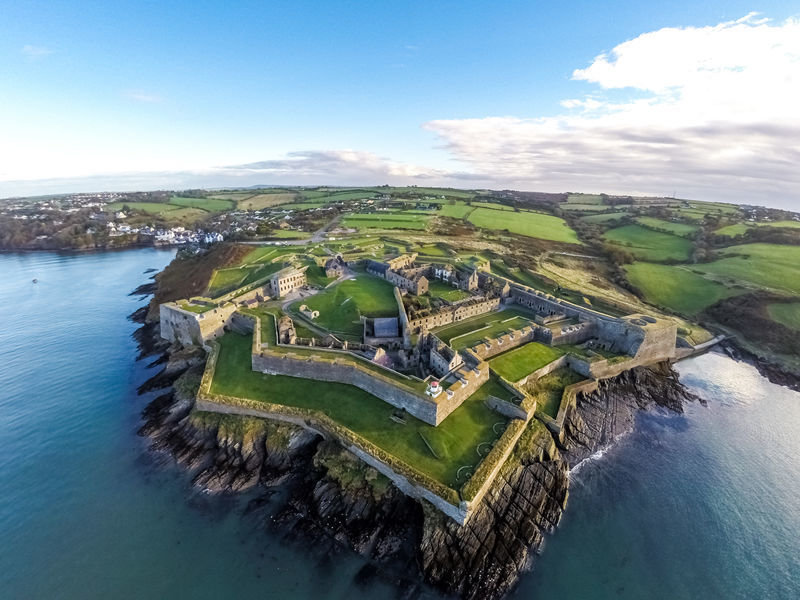 We travel along the scenic tunnels route to Glengarriff where the road leads you through a number of rock tunnels as you travel by the Caha mountains on the Beara peninsula. You will encounter stunning views of Bantry Bay before arriving in Glengarriff.

The Gardens of Ilnacullin (Garinish Island) are well worth a visit. It is a unique Island that plays host to a multitude of plant variations, and the blanket of Summer colouring which covers the Island and creates a rainbow of colour. 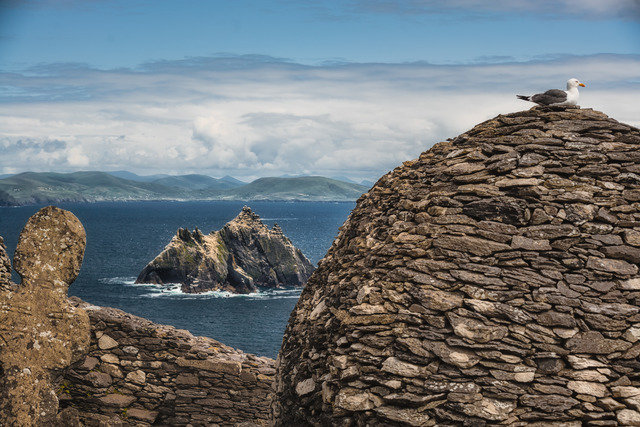 This is one of Ireland’s loveliest districts. Mountains, valleys and lakes blend into a palette of scenic splendour. A delightful day includes a drive along the broad, dramatic coastline of the Iveragh Peninsula and through the charming village.

Visit Muckross House, a magnificent Victorian mansion and one of Ireland’s leading stately homes. The gardens at Muckross House are renowned world-wide for their beauty. Overnight at the Cahernane House Hotel, Killarney. Deluxe Bed and Full Irish Breakfast 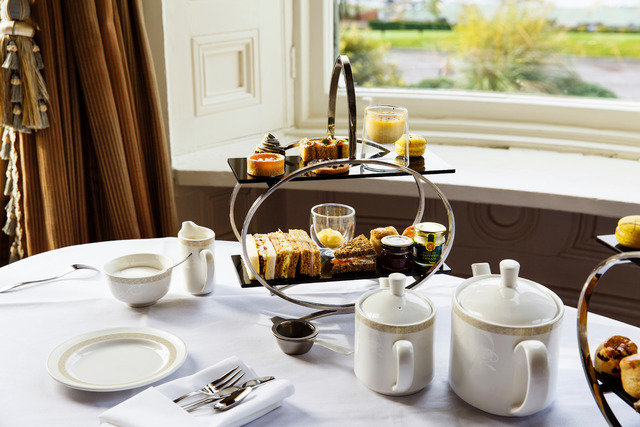 This morning we will explore the scenic area of Killarney & Continue onto the Dingle Peninsula via Inch Beach - a long beach bordered by dunes and made famous by David Lean’s movie “Ryan’s daughter”. Admire the Iveragh Peninsula and Rossbeigh Beach, it may be nice to have lunch in Sammy's Restaurant, situated on the beach.

This afternoon explore The Dingle Peninsula. Some of the finest coastal scenery to be seen in Ireland can be found in West Kerry, on the Dingle Peninsula, the most northern of the Kerry Peninsulas. This peninsula is famous for its Celtic, pre - Christian monuments and Christian churches.

It is also a ‘Gaeltacht' (Irish speaking) area, where the Irish language and traditional ways of life are preserved. Dingle town itself is a thriving fishing town and offers plenty of opportunity for shopping or simply savouring the atmosphere of a typical country Irish town with its plentiful pubs, narrow streets and busy harbour. Visit The Blasket Visitor Centre. (Depending on open dates)

The Blasket Centre on the mainland in Dún Chaoin on the tip of the Dingle Peninsula is a fascinating heritage centre/museum honouring the unique community who lived on the remote Blasket Islands until their evacuation in 1953. 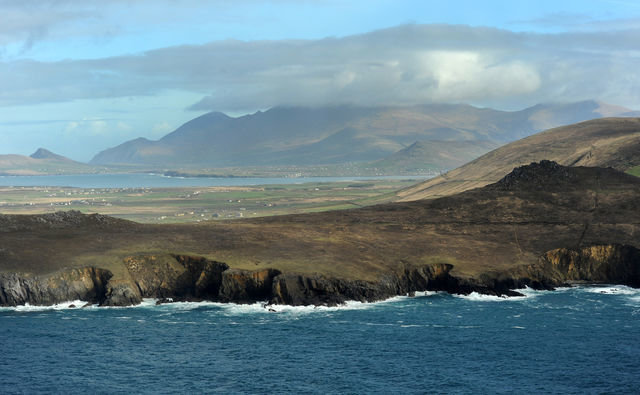 The Blasket Centre tells the story of island life, subsistence fishing and farming, traditional life including modes of work and transport, home life, housing and entertainment.

The Centre details the community’s struggle for existence, their language and culture, and the extraordinary literary legacy they left behind- classics such as ‘The Islandman’, ‘Twenty Years A-Growing’ and ‘Peig’. Their story is told using a variety of means - exhibitons, interactive displays, artefacts, audio visual presentations and artwork.

The road around the Peninsula is truly spectacular. It passes through a chain of Mountains, called Slieve Mish. Enjoy an evening of entertainment in Dingle. Overnight Benners Hotel, Dingle. Deluxe Bed and Full Irish Breakfast 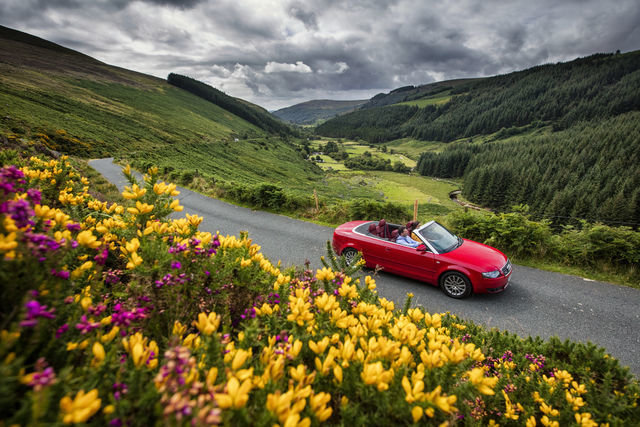 From Dingle, drive around the coast to Slea Head. Here the blue of the marine landscape surrounds the Blaskets Islands, deserted since 1953. In the distance are the two rocky Skellig islands, where the ruins of an early Christian Monastery can be found.

The Dingle Peninsula will charm you with it's villages painted in bright colours and will bewitch you with the dramatic beauty of it's landscapes. The road between Dunquin and Slea Head is dotted with beehive huts, forts and church sites. Prehistoric Dunbeg Fort is on a cliff top promontory with a sheer drop to the Atlantic and has four outer walls of stone. Inside are the remains of a house and a beehive hut as well as an underground passage.

Beehive huts are circular stone buildings shaped like a beehive which were lived in by the Kerry monks. Continue around the peninsula exploring some of Ireland’s nicest & most picturesque local shops, pubs, cafes etc.

Continue to Dromoland Castle for overnight via the spectacular Conor Pass which is the highest mountain pass in Ireland & via Bunratty Castle and Folk Park.

Bunratty Castle is one of the most complete and authentic medieval castles in Ireland. Built in 1425 and plundered on many occasions, it was authentically restored in 1954 to its former medieval splendour and now contains mainly 15th and 16th century furnishings and tapestries capturing the mood and the style of the times.

Attend the castles evening Medieval Banquet, which takes the participants back to the time that the castle entertained its visitors with fine food, wine and song. Within the grounds of Bunratty Castle is Bunratty Folk Park where 19th century life is vividly recreated.

Set on 26 acres, the impressive park features over 30 buildings in a ‘living’ village and rural setting. Meet and chat with the Bean an Ti (Woman of the House) and various street characters including the Policeman and Schoolteacher. Enjoy the tastes, scents, sights and sounds of this enchanting place as you stroll from house to house or around the charming village complete with school, post office, doctors house, hardware shop, printers and of course the pub. Overnight: Dromoland Castle,Deluxe Bed and Full Irish Breakfast

Standing 230 metres above the ground at their highest point and 8km long, the Cliffs boast one of the most amazing views in Ireland. On a clear day, the Aran Islands are visible in Galway Bay as well as the valleys and hills of Connemara. Visit Aillwee Caves. One of the oldest Caves in Ireland.

Located in the heart of the Burren in County Clare. Perched high on its Burren terraced mountainside with what has to be one of the most spectacular views of Galway Bay. It is a must for all who find themselves in the area.

The Burren is a place full of wonder, beauty and discovery. Let the staff at AILLWEE Caves welcome you to the dramatic underworld of this area.

Expert guides will accompany and inform you during your leisurely tour. The tour consists of a 30-minute stroll through the beautiful caverns – over bridged chasms, under weird formations and alongside the thunderous waterfall which sometimes gently sprays the unsuspecting visitor! Marvel at the frozen waterfall and explore the now extinct brown bears' bones (ursos arctos).

The guides will bring you back to the outside world where you can browse and shop in a distinctly different gift shop which is housed in the award-winning complex that guards the entrance to the Burren underground. 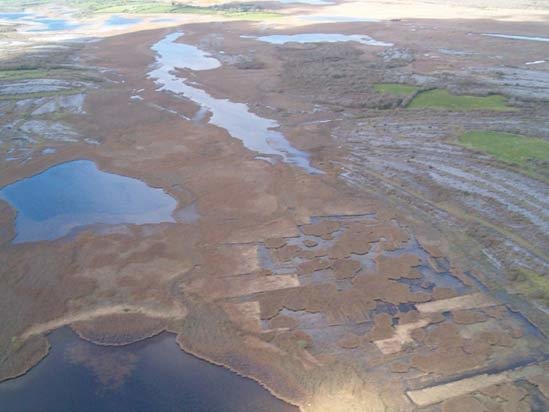 The Burren, part of which forms the 100 square km Burren National Park, is a unique place. It is a Karst limestone region of approximately 300 sq. km, which lies in the North West corner of Co Clare.

It is composed of limestone pavements, which have been eroded to a distinctive pattern. This pavement is criss-crossed by cracks known as grykes in which grow a myriad of wild flora and under which are huge caves and rivers which suddenly flood when it rains.

The Burren contains dozens of megalithic tombs and Celtic crosses as well as a ruined Cistercian Abbey dating back to the 12th century. You will discover small villages abandoned during the famine period and green roads on which you can walk for miles without ever seeing a car.

The flora on the Burren is a mixture of Arctic and Mediterranean and rare flowers such as gentian, orchids and bloody cranesbill are the rule rather than the exception. The Burren is truly an exceptional part of Ireland. 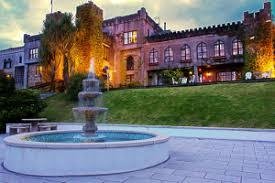 This morning you will explore the Connemara region. Connemara is a land of lakes and rivers, bogs and mountains. A land of small villages where Gaelic is still the spoken language and where little has changed little since the beginning of time. It is without a doubt the wildest and the most romantic part of Ireland.

Connemara is a vast peninsula bordered by the arid and rocky coastline of Galway Bay in the south ~ a land characteristic for it's stone walls and thatched cottages.

On it's northern shore the land is harsher and more secret, with spectacular views of the Ocean and the beautiful fjord of Kilary Harbour, as well as the steep mountains overlooking numerous lakes and large bog areas. Connemara is a real paradise for Nature lovers and those in search of strong emotions.

Visit to Kylemore Abbey: Kylemore Abbey is located in the Kylemore Pass in Connemara. Mitchell Henry built the House in 1868, after having spent his honeymoon in the area.

The architecture is best described as neo-gothic and the house still displays all the characteristics of that period. One of Kylemore Abbey's most famous features is it's miniature cathedral, built in 1870 and known locally as the Gothic church. Today, the abbey is home to the Irish order of Benedictine nuns. 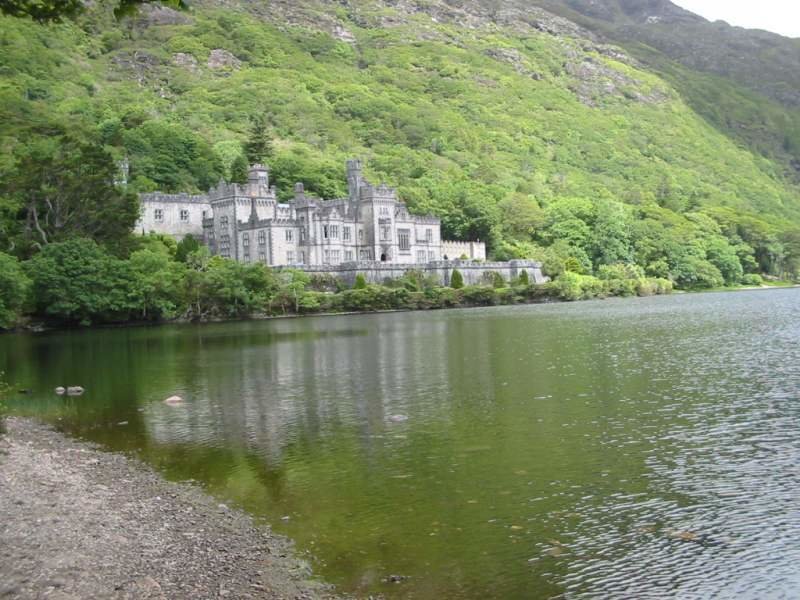 They bought the house in 1920, having fled their convent in war-torn Belgium in 1914. They established a private school for young girls, which today is the renowned Kylemore Abbey International School for young girls.
Facilities at Kylemore include a visitor centre, an exhibition housed in the main reception rooms of the house and a video which takes the visitor through the history of the house and its occupants. Continue to Ashford Castle for overnight. Deluxe Bed and Full Irish Breakfast

Day 9 – Transfer to Dublin Airport for your return to the USA.