INCLUDING THE RING OF KERRY, YOU WILL TAKE IN SPECTACULAR SCENERY, IN AN AREA SCATTERED WITH ANCIENT HUTS AND HISTORIC BUILDINGS! 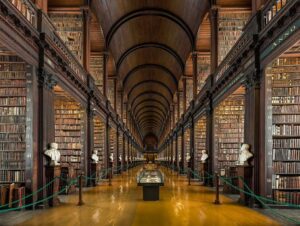 Arrive at Dublin Airport. According to the time of arrival, enjoy a tour of the highlights of Dublin.

Dublin is on Ireland’s east coast at the mouth of the River Liffey. Its historic buildings include Dublin Castle, dating to the 13th century.

Visit Trinity College to view the beautifully Illuminated Book of Kells or the National Museum of Ireland. 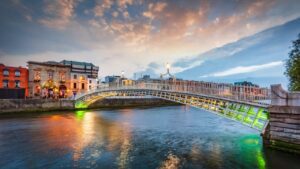 You will want to visit St Patrick’s Cathedral, Ireland’s largest church, where Jonathan Swift, author of “Gulliver’s Travels“ was once Dean. Saint Patrick’s, founded in 1191 but some sort of church has probably existed on the site for over a thousand years. The arrival of the Normans in Ireland in 1169 brought new skills and techniques in church buildings. One of the Norman’s first acts was to rebuild (in stone) Dublin’s existing Cathedral, Christ Church.

In 1191 Archbishop John Comvn raised the status of Saint Patrick’s to that of a Cathedral. With windows dating back almost two centuries, the stained-glass windows in the Cathedral are both beautiful and educational.

Stained-glass windows can be incredibly beautiful pieces of art, but they would also originally have acted as an educational resource for the Church. At a time when most people were unable to read or write, stained-glass windows were used to explain the stories of the bible in picture form. To follow the story of a stained-glass window you read from the bottom to top, rather than from left to right (as you would when reading a book). The story always begins with the image in the bottom of the left-hand windowpane, then moves to the right and the center panel is read last. 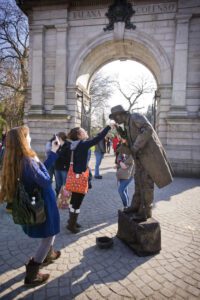 Stop off at the Old Jameson Distillery (option), situated in the old markets area of the city.

An audio-visual explains the process by which whisky is made and this followed by a whisky tasting by all in the “Ball o’ Malt Bar”. A special tasting is organized to compare the most popular Irish whiskies with bourbon and Scotch whisky.

It is an area full of contrast, granite Mountains populated only by sheep with hundreds of lakes forming a fisherman’s paradise.

Its stone walls, small farms, thatched cottages in isolated splendor with its heather covered hills creates an unforgettable scene for all its visitors.

The route takes you from Galway to the lake dotted center of Connemara at Maam Cross. The road continues through the colorful town of Clifden. Continue through the Irish speaking low-lying part of Southern Connemara with its countless lakes. 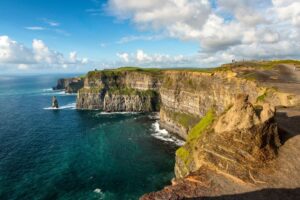 When you depart Galway for Kerry, you will travel through the heart of County Clare – The Burren Region.

Amaze at the 5,800 year old Poulnabrone Dolmen and Ballyalban Fairy Fort – home of the little men with green hats and orange beards!

This is a geological paradise boasting over 2,000 plants and many rare flowers, home to 75% of Ireland’s native flora. Also the location of numerous ancient monuments including the Gleninsheen Wedge Tomb. The Tombs are two prehistoric wedge tombs located in the north central area of the Burren.

A neck ornament dating from c.800 to 700bc, concealed in one of the limestone grykes is now displayed at the National Museum of Ireland (Kildare Street site) in Dublin.

Continue along the coast of Clare to view the spectacular Cliffs of Moher, which form a 700ft wall that plunges into the Atlantic Ocean. Drop into Doolin, widely regarded as the “Home of Irish Traditional Music”

You will travel through the heritage town of Kilrush, crossing the River Shannon by ferry (cost of ferry not included in tour price), and into County Kerry. 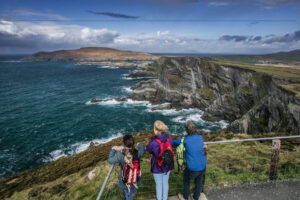 A superb tour of the Iveragh Peninsula (170 kms). Taking in spectacular scenery – mountains, peat bogs, lakes and magnificent views of the Atlantic Ocean as one travels along the coast road.

Leaving Killarney one passes through Killorglin, famous for its Puck Fair, then to Glenbeigh where the cliff road affords panoramic views of the Dingle Peninsula and Dingle Bay.

Dingle Peninsula, where films such as the epic romantic drama, Ryan’s Daughter staring Robert Mitchum & Sarah Miles and Far and Away staring Tom Cruise & Nicole Kidman have been made. 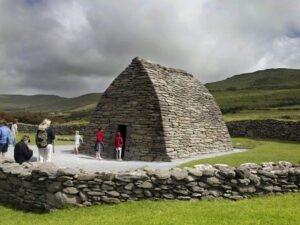 The Peninsula has an extraordinary number of ring forts, high crosses and other Ancient Monuments. The area west of Dingle has the greatest concentration of ancient sites in Kerry. This area is also a genuine Irish-speaking area.

To trace the roots of the Gaelic language, you have to look back to the “parent” language family: in this case, Celtic.

Not a lot is known about Gaels who brought the Gaelic language to Ireland but it is known that the Gaels gradually spread southward towards what is now inland Ireland and Scotland, and they brought the early Celtic language with them. 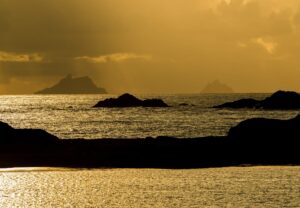 The Dingle Peninsula or Corca Dhuibhne, stretches 30 miles into the Atlantic Ocean on the southwest coast of Ireland’s Wild Atlantic Way. The Peninsula is dominated by the range of mountains that form its spine and has the most rugged coastline in Ireland. The steep sea-cliffs such as Slea Head allow magnificent views in addition to award winning sandy beaches such as Inch Beach in the south and the tombolo of Maharees to the north which runs over 3 miles long.

The area is scattered with ancient huts and historic buildings such as the Kilmalkedar Church.  Kilmalkedar was a very important monastery in the early medieval period. The ruined 12th-century Romanesque church displays fine carving, especially on the doorway and on the chancel arch. It became the parish church for the area in the 13th century, and was in use until the 16th century.

Continuing to Caherciveen one passes the birth place of Ireland’s National hero, Daniel O’Connell. Passing through the peat bogs one arrives at the sea town of Waterville.

Continue to Sneem Village, famous because of its brightly colored houses. The road continues with superb views of the famous Lakes of Killarney.

Returning to Dublin today, why not visit Birr Castle Demesne where you can visit the gardens or see one of the world’s largest telescopes.

There has been a castle on this site since 1170, and from the 14th to the 17th centuries the O’Carroll family rules from here over an area known as “Ely O’Carroll”. After the death of Sir Charles O’Carroll, Sir Lawrence Parsons (died 1628) was granted Birr Castle and 1,277 acres of land in 1620.  Now home to Brendan Parsons, the 7th Earl of Rosse, This remarkable family has resided at the romantic and inspirational setting of Birr Castle Demesne, for 400 consecutive years.

Continue to Dublin and after checking into your hotel on the outskirts of the city, you can complete your tour with a final visit to Dublin’s city center.