AN EXPERIENCE YOU WILL TREASURE FOR MANY YEARS TO COME, THE SPECTACULAR RING OF KERRY 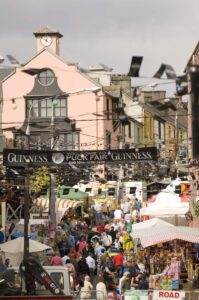 The banks of the River Laune to Killorglin

The Ring of Kerry is usually done in an anti-clockwise direction along the banks of the River Laune to Killorglin, known for the annual Puck Fair festival, which traditionally starts with the crowning of a “king” goat. We then move on via Glenbeigh, Kells, Caherciveen and the southern shores of Dingle Bay.

The area around Glenbeigh has a high concentration of prehistoric open-air rock art dating back to the Late Neolithic/Early Bronze Age period (2300-1500BC).

The Town of Kells is best known as the site of Kells Abbey, from which the Book of Kells takes its name. The Abbey was founded in the early 9th century, and the Book of Kells was kept there during the later medieval and early modern periods before finally leaving the Abbey in the 1650’s.

The tour continues to Waterville and along the coast via Coomakista Pass and Derrynane and on to Sneem.
The views from Coomakista Pass, of Derrynane Bay and Abbey Island, Deenish Island and Scariff Island are wonderful!

From Sneem we travel up the mountain road to Molls Gap, then via Ladies’View, and back to Killarney. Ladies’ View name stems from the admiration of the view, given by Queen Victoria’s ladies-in-waiting during Victoria’s 1861 visit to Ireland.

In addition to stopping at all points of interest en route we also stop for an hour at lunchtime. In the afternoon a stop will be made for tea/coffee/Guinness/refreshments.

You will find our guides knowledgeable, friendly and always willing to share a joke with you. It’s an experience we hope you will treasure for many years to come. The tour returns to Killarney in the evening.

Softly, softly, voice of the winds
This is where the story begins,
Long, long ago, in the magic of time
Lived the high kings of Ireland, their music and rhyme

Of legends and folklore and ancient high kings,
Of leprechauns and banshees and all magical things
It tells of an Ireland so rugged and fair
Of mystical spells, and heavenly prayer.

Places so lovely all sparkling and bright
Of star studded heavens, like jewels in the night
It speaks of the crowns all ancient and past,
All regal in splendour and never surpassed

So look to tomorrow, the rainbow will shine,
Softly, softly, those dreams are all mine,
When God made old Ireland, I have to confess
The high kings of Ireland, he surely did bless

Perhaps in your dreams now, perchance you will see,
Those realms of such beauty, that once used to be,
And there in your dreams, in sleep state and mind,
Those high kings of Ireland, youÕll probably find.

‘The most beautiful place on earth‘ – National Geographic

Film location for Star Wars Episode VIII, The Last Jedi, Ryan’s Daughter and Far and Away……