A TRIP TO THE ISLANDS OFFER A JOURNEY THROUGH TIME AS WELL AS AN ENCOUNTER WITH THE OLD IRELAND, THE MYSTICAL IRELAND 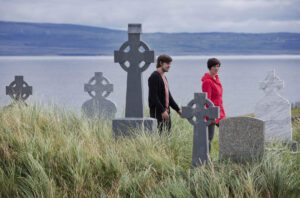 You will visit Inis Mór – (Inishmore – meaning big island), as its name suggests is the biggest of the 3 Aran Islands. Lying in a North – Westerly direction across Galway Bay. Sailing time to Inis Mór is 40 minutes.

The Island sits at the mouth of Galway Bay and is known for ancient sites, like the prehistoric clifftop Fort Dún Aonghasa.

Its principal port and village is Kilronan (Cill Rónáin) and it is here that most visitors are first introduced to the Island. Kilronan is a lively village with many of todays’ modern conveniences, comfortably co-existing with Irish traditional practices and culture. 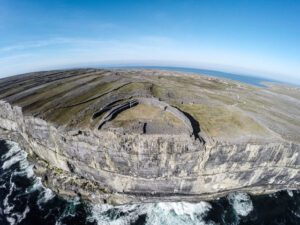 At the edge of a 100-metre-high cliff, Dún Aonghasa is an important archaeological site, it is thought that most of the structures date from the Bronze Age and Iron Age.

Excavations at the site indicate that the first construction goes back to 1100 BC when rubble was piled against large upright stones to form the first enclosure.

At the time of its construction sea levels were considerably lower and it is estimated that originally it was approximately 3200 feet from the sea. The original shape was presumed oval or D-shaped but parts of the cliff and fort have since collapsed into the sea, surviving stonework is 13 feet wide at some points.

These ruins also feature a huge rectangular stone slab, its function is unknown.
The walls of Dún Aonghasa have been rebuilt to a height of  20ft and have wall walks, chambers and flights of stairs. There is also a small museum illustrating this history of the fort.

Also in the vicinity is a Neolithic tomb and a small heritage park featuring examples of traditional thatched cottages.

Nearby is the Worm Hole (Poll na bPéist), also known as ‘Serpent’s Lair‘ or the ‘Monster’s Hole‘. A natural formation arranged in the shape of a nearly perfect rectangular hole. Said to have “more of a Star Trek vibe”,  This place fascinates! 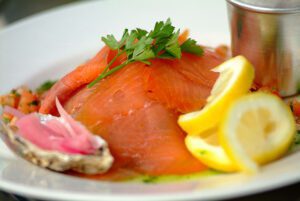 The medieval Christian ruins of the Seven Churches ( Na Seacht dTeampaill) are in the the northwest of the Island.

When the ancient structures were built on this site around the 7th or 8th century they were one of the earliest Christian pilgrimage sites in the country.

The largest and most complete of the ruins, St. Breacan’s Church (Tempall Bhreacán), still features ornate stonework and bears the name of a saint that moved to the area in the 5th century. Here you will also find ancient Celtic Crosses.

Clochán na Carraige is a stone structure with a beehive roof rectangular in shape dating from the early Christian period. The structure has two opposing doorways in the traditional manner and a small window facing south west. The corbelled or beehive roof is a fine example of its kind.

Kilmurvey Beach is known for birdlife and a grey seal colony. The sand is brilliant white and the sea is a perfect blue. The beach is safe for swimming for young and old.

I have a curled photograph
With waves that crest behind you
And your hair, golden veins,
Tangled in the sun that caves,
There you sit— my open secret,
Atlantic,
Frees my wrested heart
At the fortress—
Altar,
Dún Aengus.

In that place, that wanting place,
High— on the jagged edge
I captured you,
Your eyes were ocean,
Atlantis,
Never so deep, never so
Lost.