ENJOY THIS EXCITING DAY LONG ESCORTED TOUR OF THE SPECTACULAR CLIFFS OF MOHER AND GALWAY CITY. 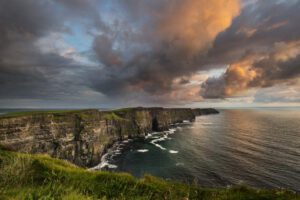 The Curragh of Kildare

We head out to the west of Ireland, where you will see the Irish countryside with its rolling hills and green pastures, also passing by the famous Curragh in County Kildare, where horse racing is king. First we will arrive at the spectacular Cliffs of Moher. The Cliffs of Moher are 200 meter high, 8 kilometre long ridge of cliffs jutting out into the ocean. Enjoy stunning views over the Atlantic Ocean and the Aran Islands and take your time to soak up the natural beauty of the Cliffs of Moher.

During your visit to the cliffs, you can choose to Visit O’Brien’s Tower, marking the highest point of the Cliffs.

Spend your time wandering along the cliff edge, while looking over to the Gaelic speaking islands of Aran. Keep an eye out for an array of birdlife. The adjacent Interpretive Centre explores different elements of the mighty Cliffs. 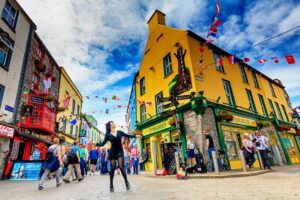 Next we will visit what’s known as the “City of Tribes’’ – Galway (Irish – Gaillimh), where residents of the city are referred to as Galwegians.
A harbor city on Ireland’s west coast, this city site where the River Corrib meets the Atlantic Ocean.

You will find stone-clad cafes, boutiques and art galleries throughout the winding lanes of the Latin Quater, which still retains portions of the medieval city walls.

There are also remnants of this medieval towns walls that lie between shops selling  Aran Sweaters and Claddagh Rings. Over the years, as folklores state, clans adopted the Aran Sweater as their symbol. Patterns were safeguarded within families and passed down from generation to generation.

All of the City was a Walled City and grew around a fortification built by the King of Connacht in 1124. At the junction of Shop Street and Upper Abbeygate Street is Lynch’s Castle, a 16th-century castle which has been converted into a bank and a few remaining Irish Gargoyles may still be found on its exterior.

Explore the meandering streets, enjoy the many cafe’s, the live music and the brightly painted pubs of this historic city!