THIS TOUR VISITS THE TWO MOST FAMOUS TOWNS IN THE CORK REGION; COBH, HOME OF THE FINAL DEPARTURE OF THE TITANIC AND BLARNEY TOWN WHERE YOU WILL KISS THE BLARNEY STONE AT BLARNEY CASTLE, GAINING THE 'GIFT OF ELOQUENCE' 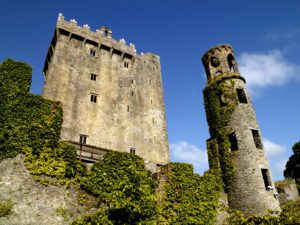 We begin the day with a scenic drive to Blarney.

We allow plenty of time in Blarney to give you the chance to visit the world famous Blarney Castle and gardens, and to kiss the Blarney Stone and take home the gift of the gab.

We can also explore the magnificent gardens and visit the witch of Blarney.

With its towers, battlements and gated entrance, built on a rocky outcrop, Blarney Castle still retains its old world charm.

The Castle was a medieval stronghold. Though earlier fortifications were built on the same spot, the current keep was built by the MacCarthy Clan of Muskerry dynasty, a cadet branch of the 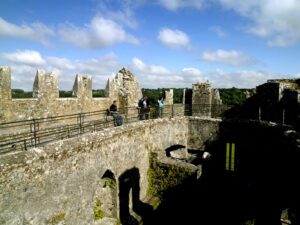 Kings of Desmond, and dates from 1446. The Blarney Stone is among the machicolations of the castle.

Kiss the Blarney stone, situated on the parapets of the castle, to gain the gift of eloquence – that is the ability to persuade people and being able to talk yourself out of trouble.

ADMISSION TO THE CASTLE IS INCLUDED.

A picture postcard pretty village by the sea, a place in world history, world-class, and a warm welcome will be had when we arrive at the Great Island to explore the town of Cobh (pronounced Cove – ‘bh’ comes down to the sound of  ‘V’, therefore pronounced Cove).

Situated on the Cork harbor (the second-largest natural harbor in the world), the town is accessed by a single road bridge, train or car ferry. 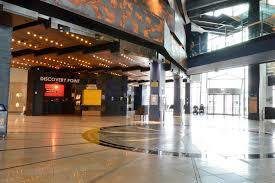 Of course is famous as the point of embarkation for millions of Irish emigrants travelling away from Ireland during the 1800s and 1900s. It was the last stop of the Titanic in 1912.

On April 11, 1912, the pride of the White Star line dropped anchor for the last time here at Roche’s Point at the entrance of Cory Harbor. Having picked up 123 passengers, she then sailed westward for her final voyage.

If you claim Irish descent, then there is a good chance that your ancestors left Ireland through Cobh.

The Titanic Experience, Cobh, is in the former White Star Line Ticket Office. You will find more displays on the liner in the Cobh Heritage Center, which also explores how Cobh became an embarkation point during Ireland’s mass emigrations. 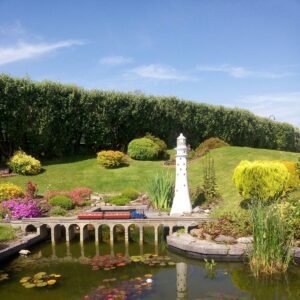 The arrival of the Railway in Cobh in 1862 facilitated the mass emigration of people from Cork Harbor.

Mail destined for, or originating in Britain was also transferred from and to transatlantic liners.

Jules Verne, traveling on the Great Eastern noted that through the use of mail trains from Cobh via Kingstown (now Dun Laoghaire) to Liverpool that “the dispatches conveyed by the way gain a full day compared to the ocean liner’s route”. This was great progression!

North of town, Fota Wildlife Park is on Fota Island, here, see a Kangaroo hop in front of you, a Cheetah run by or get close to a Ring-tailed Lemur!

Fota Wildlife Park cares for several different animal species in danger of extinction. Through long-established Breeding programs, which are run cooperatively with other institutions around the world, the Park is helping restore populations of some species while protecting the very survival of others.

The town is dominated by the magnificent Roman Catholic St. Colman’s Cathedral that is perched on the hillside. It is a magnificent neo-Gothic building that took 47 years to build, starting in 1868.

The Cathedral organ has 2,468 pipes. It also has a 49 bell carillon with the largest bell weighing 3.6 tons and suspended 200 feet above ground!

In 1953, Laurel and Hardy visited Cobh and a welcome tune of “Cuckoo Waltz” was played, now there are regular recitals of this tune in the summer months.

About the ‘shady side of the tracks’…

The sea shanty “The Holy Ground” refers to the eastern part of Cobh that wasn’t holy at all.
The area catered for the needs of sailors!

Further out in the harbor is Spike Island.
It has a star-shaped fort and was a formal penal colony
where convicts waiting to be transported to Barbados or Van Diemen’s Land were held.