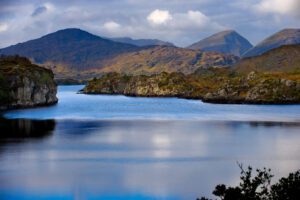 Enjoy the first stop of the day is Carrickfergus Castle, ( Irish Carraig Ḟergus or “cairn of Fergus”).

The name “Fergus” means “strong man”. The castle is a Norman castle, on the northern shore of Belfast Lough. The castle played an important military role until 1928 and remains one of the best preserved medieval structures in Northern Ireland.

In the days of its use it was strategically useful in that 3/4’s of the castles perimeter was surrounded by water.

Carrickfergus Castle was built by John de Courcy in 1177. The chamber on the first floor of the east tower is believed to have been the castle’s chapel on account of its fine Romanesque-style double window surround. The ribbed vault over the entrance passage, the ‘murder hole‘ and the massive portcullis at either end of the gatehouse are later insertions started by Hugh de Lacey who did not live to see its completion by 1250 as he died in 1248. It was finished by King Henry III

We then travel onward to the world famous Carrick-a-Rede Rope bridge.

The brave among us can make the terrifying trip across the bridge that was originally erected by salmon fishermen (weather permitting)*, or for those who prefer to keep their feet firmly on land, take one of the exhilarating walks, and enjoy the stunning views. We then have a break from our sightseeing, when we relax over lunch at Bushmills Distillery.

Here you can also browse in the extensive gift shop, or make a visit to the bar to have a swift taste or two of the famous tipple! After you re-fuel at the Distillery, we will move on to the highlight of the tour. 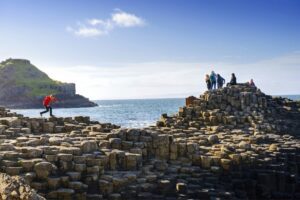 The Giant’s Causeway is a UNESCO World Heritage Site.

At the “Giants Place“, spend some time climbing over the ancient stones. The land here is not only beautiful, but the 40,000 interlocking basalt columns are also testament to a major stage in the earth’s development.

The jagged promontory of neatly packed columns of hexagonal basalt rocks created some 6 million years ago by a flow of basaltic lava; consists of a series of over 40,000 hexagonal shaped rocks that looks like a grand set of stairs leading into the sea.

As legend has it, Northern Ireland was once home to a giant named Finn McCool (also called Fionn Mac Cumhaill).

When another giant – Benandonner, across the Irish Sea in Scotland – threatened Ireland, Finn retaliated by tearing up great chunks of the Antrim coastline and hurling them into the sea.

Enjoy the myths and legends that surround this world famous Giants Causeway!

We then make our way to along the coast, for one last short stop at the ancient ruins of picturesque, romantic, Dunluce Castle. 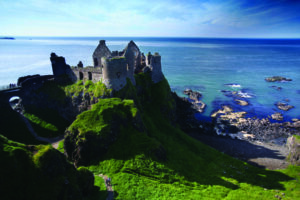 Dunluce Castle, and erstwhile home of the notorious McDonnel clan! Dunluce Castle is a now-ruined medieval castle in Northern Ireland, located on the edge of a basalt outcropping in County Antrim.

With evidence of settlement from the first millennium, the present castle ruins date mainly from the 16th and 17th centuries. Of course, its current “claim to fame” is that filming of the Emmy Award winning television series, “Game of Thrones“, took place here and featured a huge cast. 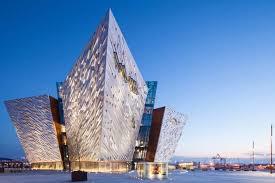 The Castle was used as the Seat of House Greyjoy, the great castle of Pyke in the ‘Game of Thrones’.

House Greyjoy is one of the great houses of Westeros and rules over the Iron Islands from the seat of Pyke.

On this trip, an exhilarating day will be had by all!

All that then remains to be done is to sit back and relax on the comfortable journey back to Belfast.